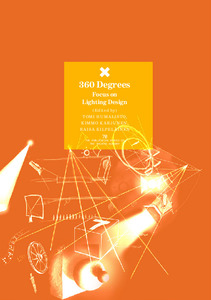 The Theatre Academy Helsinki began teaching lighting design in 1986.
Since that time, instruction in the degree programme has focused on artistic and technical competence in its mission of helping students form an independent artistic identity.
A bold move in its day, the establishment of the lighting design programme has had a profound impact on the Finnish performing arts, as artistic teams have been enriched by a new class of practitioners -
artists, thinkers, designers, executors - whose contributions are integral to creating total works of art.
Three decades later, lighting design has become established as an artistic field in its own right in the Finnish performing arts;
lighting-centred thinking and the use of light have also made strong inroads in other fields, including the fine arts and architecture.
The work of lighting designers has left a critical, concrete imprint in the form of both powerful works and collective learning.
Despite this, research and articles on the field are rarely published in Finland.
This collection, 360 Degrees: Focus on Lighting Design, aims at stimulating conversation about the profession and its history through a diversity of phenomena and perspectives.
The hope is that deeper self-understanding will spur further evolution within the field, while making lighting design visible as one art among others.
Contributors responded to an open call for submissions, and their writings fall under three broad themes.
The first section of this book covers the history of lighting design and its instruction in Finland.
In the second, lighting designers reflect on their approach to their work and professional identity as designers and artists.
The third and final section delves into questions of visual perception, conceptions of transparency, and the relationship between designer and technology.
Originally published in Finnish in 2017, this volume was commissioned to celebrate the 30th anniversary of the lighting design programme at the Theatre Academy of the University of the Arts Helsinki.