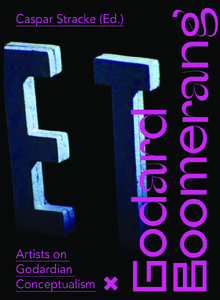 Stracke, Caspar
The Academy of Fine Arts at the University of the Arts Helsinki

This publication is the late outcome of a small symposium that took place in 2013 at the subject area time and space arts at the Academy of Fine Arts at Uniarts Helsinki. It presented research and analysis of conceptual traces in Godard’s oeuvre and its relation to contemporary art practices. Beyond the invited contributors from this symposium, the project expanded into a larger collection of writings by contemporary artists and curators on Godardian references, influences and (re-)discoveries, centering around a particular phenomenon – what we call the “Godard Boomerang” is a set conceptual strategies deeply rooted in 20th century art cinema, propelling towards the future practices in moving image art. Gareth James, one of the contributors, reminds us that contemporary art still lacks some crucial pedagogy in this regard. In his text he asks, “what capacities might contemporary art need to possess in order to be capable of registering the objective historical achievements of Jean-Luc Godard?”So, why still Godard? A question we heard many times in the course of editing this book.And further: “Wouldn’t this be an appropriate moment in history to pass the torch?”Most likely there is no more torch to pass. If there is a thing to pass (a merit, a philosophy, an attitude), the questions would still remain: Passing it on to whom? To an individual? A collective? An entire movement? The latter would fit so much better into a time that has begun to successfully diversify and cross-reference contemporary thought, refusing to follow isolated key thinkers by de-magnetizing their rocky islands of ideology. Needless to mention, contemporary efforts to contest gender and geopolitical dominances also complicate any attempt to simply “return” to Godard.The recent chain of power shifts, uprisings, in the Middle East and Eastern Europe, migration movements from war-torn North African nations and armed conflicts all over the world have brought forth new moving-image practices many of which have drawn from Godard’s militant filmmaking period. In recent years, the latter has been rediscovered and analyzed more thoroughly than ever before. Almost a third of the contributions in this book are resonating with these efforts.Most of the texts were written in the time right before Godard himself turned to the precise topics of the aforementioned research. His most recent works, Adieu Au Language and especially Le Livre d’Images return to precisely topics of his Militant Cinema period. A distinct divide between two opposing groups of Godard scholarship has therefore become more apparent – those who praised Godard’s narrative filmmaking and those who are solely interested in his documentaries and collage essay films. However, this collection of writing does not belong to either of them. The authors working from the perspective as artists that always relate the given topics to their own practice. This reflection through a separate faculty enables a triangulations, by entering in further dialogues with other Others, which, in this case are: Edward Said, Jorge Luis Borges, Guillermo Gomez-Peña, Hito Steyerl, Eija-Liisa Ahtila , FEMEN, Birgit Hein, Laura Mulvey, Peter Wollen, Kaja Silverman and Harun Farocki.