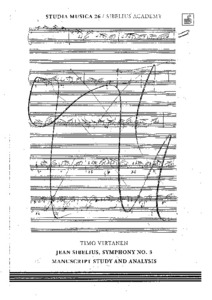 This study is divided into two parts. In the first part, the compositional process ofJean Sibelius's Third Symphony is discussed from the perspective of manuscript study. This study has revealed that the compositional process was long and intricate, and several works, completed either before or even years after the Symphony, were intermingled in the process. At the beginning of the compositional work, Sibelius does not seem to have had a clear idea of the Symphony or its movements as a whole. Nothing in the manuscripts indicates that he was intentionally building up broad passages and sections from small motives. On the contrary, Sibelius seems to have constructed the work by bringing together ideas which he had written in his sketch collections over many years and which originally did not share common roots. His central task seems to have been to build up a unified whole of the separate and originally rather fragmentary elements. Sibelius's manuscripts reveal that the composer made unsuccessful attempts to combine different ideas before he finally arrived at combinations which he found acceptable. The manuscript study, together with some observations presented in literature earlier and future research, may clarify the picture of Sibelius's composing strategy, which the composer himself referred to as creating a picture from fragments of a mosaic.
The second part of the study presents an analytical view focusing on questions of harmony and voice­leading structure, and form discussed from the perspective of Schenkerian theory, while che thematic and other aspects having to do with the formal design are of more marginal interest here. Although the form of the Third has often been described as the most classical of ali Sibelius symphonies, many passages in the work have been regarded as problematic, or even unanalysable. The apparent "classical" clarity of the music may be a result of certain features of the thematic disposition, whilst a study of the interaction between tonal structure and formal design in the work may open up new perspectives on the questions of form. Since Sibelius's music stylistically is situated between the classic-romantic tonal tradition and the new trends of the early 20th century, the applicability of the Schenkerian approach forms a central methodological question. In order to understand the characteristics of the tonal structure in Sibelius's music and the ways of departing from the tonality of the common-practice period in Sibelius's works, the particular features in his music have to be mirrored against the background of tonal conventions. Schenkerian theory opens up a possibility to elucidate these relations.
The Epilogue sheds light on the possible programmatic background of Sibelius's Third Symphony. In 1905 Sibelius was planning an oratorio on a libretto written by Jalmari Finne and based on the Finnish national epic, the Kalevala, and some characteristics of the Symphony display interesting parallels with the oratorio libretto.