Reconsidering the Roots of Minimalist Music : An Examination of Post-War Europe and its Minimalists 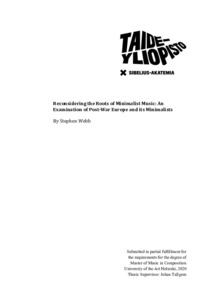 This paper examines the styles, traditions, and aesthetics associated with
various schools of minimalism in Europe, including New Simplicity, Neue
Einfachkeit, The Hague School, and Mystic Minimalism. Through historical and
sociological discussion, a breakdown of the cultural and political circumstances
that fostered these movements are presented. It is the author's intention to show
that different schools of minimalism appeared in Europe parallel to those in the
United States, disrupting the often-accepted notion that minimalism as a musical
style appeared first in U.S. metropolitan areas.
The second part of this paper attempts to understand why the European
contributions to minimalism have historically been placed in the periphery. To
do so, it examines the post-WWII European music industry, specifically radio
broadcast and new music festivals, to make the argument that these composers
were overlooked due to the industries need to close the cultural gap (years 1930-
1946.)
This paper finds that European minimalism had unique qualities that
differed from American minimalism and that conservatism from cultural elites
and the music industry obscured the visibility of European contribution to
minimalism on a global scale.