Imagination in the creative process of kantele improvisation: Exploring the concepts of runosong culture in contemporary folk music 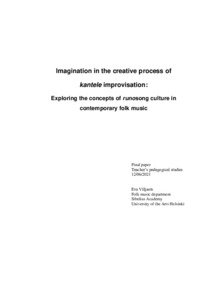 This paper examines the connections between imagination and the creative process of
improvising. In addition to that, pedagogical aspects of using imagination in music
lessons were examined. The research question is: in what ways can imagination be part
of the creative process of improvisation? In this research, the concept of
‘improvisation’ is applied stemming from the context of ancient kantele playing
tradition. In the older layer of Finnish folk music, the runosong culture, the ancient
zither-like string instrument kantele was central and the nature of music in runosong
culture was improvisational. For conducting this research and analysing the data,
principles of a qualitative approach were followed and for collecting the empirical data,
semi-structured interviews were used.
As the main findings, imagination is seen being inseparable from creativity and
improvisation. To improvise, to ‘play one’s own power’, means to play one’s
imagination and from that perspective, imagination is the core of improvising. Also,
imagination is closely connected with the values that improvising has for the
participants – the freedom of body and mind and non-judgemental thinking.
Imagination is there in the improvisation through these values and at the same time
carrying its essential quality of freedom. Moreover, using imagination in music lessons
has long-term benefits for the students. It helps the students to find a personal
relationship with the music, develop creativity and trust in themselves. Using
imagination is a fruitful way of growing students’ well-being in education.
I suggest that even nowadays the ancient kantele improvisation style which is the core
of this research, is successfully applicable to other instruments and different musical
situations. In addition, the impact of using imagination and improvising in music
lessons could be seen in a wider social and cultural context. Using imagination in the
teaching and learning processes and applying such values as freedom, equality and
non-judgemental thinking could contribute into a better well-being in both, personal
and societal level.