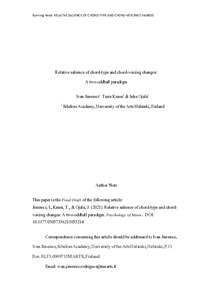 Our research project investigated the effect of background and stimuli factors on the relative salience of chord-type and chord-voicing changes. Earlier studies have shown that surface features tend to be easier to perceive than deeper features and that musical training attenuates this general tendency. For further studying how deeper-level and surface-level musical features are perceived, we used a two-oddball paradigm. Each item consisted of a succession of five same-root chords: one chord-type oddball (deeper feature), one voicing oddball (surface feature), and three standards. Participants chose the chord that sounded most different to them. All chord-type pairings formed of major, minor, dominant seventh, major seventh, and minor seventh chords were tested. Chord-type oddball and voicing oddball were chosen equally often, together forming the majority of the responses. Musical training and conceptual knowledge of chords affected the chord-type oddball responses, but not the voicing-oddball responses. However, chord-type oddballs were chosen regardless of the musical training. Chord-type responses were easiest for pairs consisting of a major-based and a minor-based chord and for pairs involving two pitch-class changes. Our results suggest that musical training and conceptual knowledge about chords is not the only factor influencing the relative salience of chord-type changes over voicing changes.