Historical materiality of performance : On the costumes of The Rite of Spring (1913) 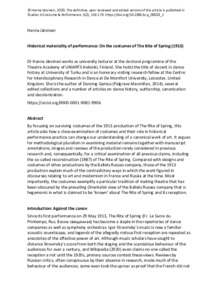 By focusing on surviving costumes of the 1913 production of The Rite of Spring, this article asks how a close examination of costumes and their role in historical performance practice can change our understanding of a canonical work of art. It argues for methodological pluralism in examining material remains together with manuscript annotations, images and reviews of the production rarely considered in previous research and, consequentially, for a critical examination of all previous claims, including the so-called reconstruction (1987) of The Rite of Spring. Compared with designs and costumes of other productions by the Ballets Russes company, those of the 1913 production explain much of the contradictory ways in which the work figured in discourses relating to art and modernism in France and Russia at the time. Most importantly, the costumes exemplify a particular tradition of making theatre that has been obscured by the prevailing Orientalist view of the Ballets Russes company that is hegemonic in what is claimed to be ‘known’ about The Rite of Spring and its reception.