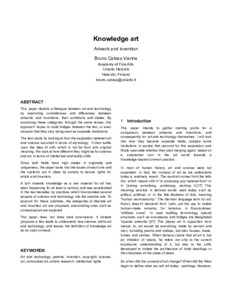 This paper depicts a dialogue between art and technology, by examining coincidences and differences between artworks and inventions, their conditions and stakes. By examining these categories through the same lenses, this approach hopes to build bridges between the two, or even propose that they stop being seen as separate institutions.
The text starts by looking at how the separation between art and science occurred in terms of etymology. It then builds upon the idea of skill, which is not far from art's original meaning. We look at how different they might be for science and art, in terms of intellectual and bodily skills.
Since both fields have high stakes in originality and uniqueness, the paper looks into the issues of each one and the systems put in place by society to assure rights for artists and inventors.
A turn towards knowledge as a raw material for art has been happening for a least a century, and was accelerated in the last decades by practices which incorporated several aspects of science and technology into the creative arts. To account for these practices, the categories of discrete art and invention art are proposed, and existing ones such as conceptual art are explored.
The paper does not draw hard conclusions. It instead proposes a few leads to understand new stances within art and technology, and leaves the definition of knowledge art as an open concept.