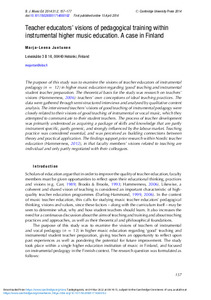 The purpose of this study was to examine the visions of teacher educators of instrumental pedagogy (n = 12) in higher music education regarding ‘good’ teaching and instrumental student teacher preparation. The theoretical basis for the study was research on teachers’ visions (Hammerness, 2006): teachers’ own conceptions of ideal teaching practices. The data were gathered through semi-structured interviews and analysed by qualitative content analysis. The interviewed teachers’ visions of good teaching of instrumental pedagogy were closely related to their visions of good teaching of instrumental or vocal music, which they attempted to communicate to their student teachers. The process of teacher development was primarily understood as acquiring a package of skills and knowledge that are partly instrument specific, partly generic, and strongly influenced by the labour market. Teaching practice was considered essential, and was perceived as building connections between theory and practical application. The findings support prior research within Nordic teacher education (Hammerness, 2012), in that faculty members’ visions related to teaching are individual and only partly negotiated with their colleagues.