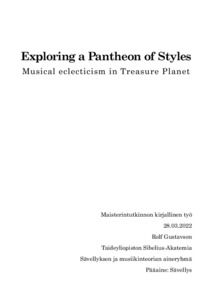 This master's thesis explores and examines the musical eclecticism in Disney's Treasure Planet (2002). The research aims to create an overview of the eclectic styles and approaches employed by film composer James Newton Howard by dividing the music into score categories.

The first chapter will establish the preliminaries of this thesis, presenting the terminological definitions, methods, and objectives of the study, and most importantly, the research questions. The primary research question is as follows:
What are the specific factors steering the utilization of eclectic musical styles in the animated feature film Treasure Planet?

The second chapter will briefly summarize the film's historical context, its corresponding plot and present important musical elements. Moreover, the chapter will focus on defining and identifying the score's different categories and themes on top of analyzing these findings in relation to the movie's three acts.
In the third and final chapter, the study's core ideas will be concluded and summarized in order to gain an understanding of how these eclectic musical elements have been employed in Treasure Planet.

Relevant film music research, interviews, documentaries, and soundtrack reviews have been combined with quantitative studies conducted by the author to gain knowledge about the subject.

The result of this study exhibits that Treasure Planet consists of an eclectic collection of different musical styles serving the narrative purposes of the film itself. The Celtic elements of the score have been interpreted as folk music within the world of the protagonist's home planet, Montressor, and the concept of the 70/30 split has been interpreted as something that bears less importance in the realm of music than in other, visually-driven parts of the film making process.