Digging Dalcroze, or, Dissolving the Mind‐Body Dualism : Philosophical and practical remarks on the musical body in action 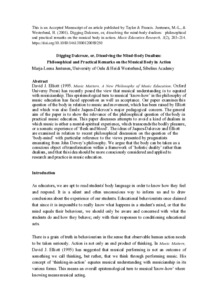 David J. Elliott ( Music Matters. A New Philosophy of Music Education , Oxford University Press, 1995) has recently posed the view that musical understanding is to be equated with musicianship. This epistemological turn to musical 'know-how' in the philosophy of music education has faced opposition as well as acceptance. Our paper examines this question of the body in relation to music and movement., which has been raised by Elliott and which was also Émile Jaques-Dalcroze's major pedagogical concern. The general aim of the paper is to show the relevance of the philosophical question of the body in practical music education. The paper discusses attempts to avoid a kind of dualism in which music is either a mental-spiritual experience which transcends the bodily pleasure, or a somatic experience of 'flesh and blood'. The ideas of Jaques-Dalcroze and Elliott are examined in relation to recent philosophical discussion on the question of the 'body-mind' with particular reference to the views presented by pragmatists emanating from John Dewey's philosophy. We argue that the body can be taken as a conscious object of transformation within a framework of 'holistic duality' rather than dualism, and that this idea should be more consciously considered and applied to research and practice in music education.