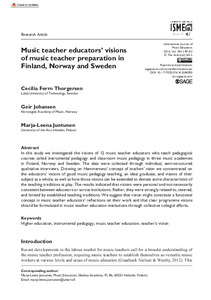 In this study we investigated the visions of 12 music teacher educators who teach pedagogical courses called instrumental pedagogy and classroom music pedagogy in three music academies in Finland, Norway and Sweden. The data were collected through individual, semi-structured qualitative interviews. Drawing on Hammerness’ concept of teachers’ vision we concentrated on the educators’ visions of good music pedagogy teaching, an ideal graduate, and visions of their subject as a whole, as well as how those visions can be extended to denote some characteristics of the teaching traditions at play. The results indicated that visions were personal and not necessarily consistent between educators or across institutions. Rather, they were strongly related to, steered, and limited by established teaching traditions. We suggest that vision might constitute a functional concept in music teacher educators’ reflections on their work and that clear programme visions should be formulated in music teacher education institutions through collective collegial efforts.