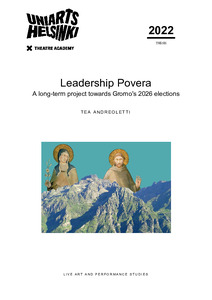 In 2026 I will run for mayor as an artist in the municipal elections of my hometown, Gromo, a small village in the Alps of the Upper Seriana Valley, northern Italy. In June 2021, I inaugurated the long-term candidacy project with my thesis performance, A celebration of the beginning of a long-term project. As my whole artistic practice, this long-term project resonates with the broad tradition of Arte Útil and socially engaged art.

I approach the candidacy with the ethics of what I call Leadership Povera (poor leadership). I develop this concept in the written thesis by recalling the links with positive poverty, a notion far from the idea of poverty in economic language. Furthermore, I employ the research technique of my artistic practice, Learning something through something else, to unveil the characteristics of Leadership Povera.

Firstly, the thesis explores the socio-political issues of the rural villages in the Upper Seriana Valley: Gromo, Valgoglio, Gandellino and Valbondione and declares that a union of the four municipalities is the proposal that I want to pursue.

Secondly, I explore positive poverty by observing the meaning of poverty in different times/contexts and recounting the use of the term "poor" in the Italian language and the Christian tradition.

Lastly, I deepen the concept of positive poverty through the figure of St. Chiara (Claire) and St. Francesco (Francis). In 1200, they fought for a radical proposal of social deconstruction against the divisions of class, religion and species.

Through the concept of Leadership Povera, the thesis argues that the scarce situation in Upper Seriana Valley can be an opportunity to imagine new forms of collectivity, collaboration, mutual aid, self-sufficiency, and alternative governance. Leadership Povera performs in the direction of a union of municipalities, involving and empowering the inhabitants in the decisions of the valley's future. Therefore, the thesis concludes that at some point, the candidacy will no longer be my art project and it will become a common governance project.

The thesis research is the beginning of a long-term practice that will continue in contact with the community of Gromo and the Upper Seriana Valley.