Where do images come from? : detours around Ted Serios's "thoughtographic" photographs 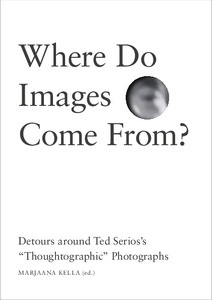 In the mid-1960s, the Western world was confounded by a peculiar case. The person at the center of this attention was Ted Serios, a bellhop at a Chicago hotel, who was said to possess a unique talent: he could produce photographic images by using only his mind. Dr. Jule Eisenbud, a respected psychiatrist from Denver who was fascinated by the workings of the human mind, made a significant contribution to studying this phenomenon in 1964–1967. However, understandably, people saw the pictures - called thoughtographs - as a scam and their origin as some sort of magic trick. The essays in this collection do not focus on the truth and the untruth of these experiments. Instead, the story of Serios has tempted the authors to consider a variety of deviations from and detours around a subject that defies rational explanation. The thoughtographs do not make sense: their contours blur and blend with the ontology of the image in general. How do images appear to us in the first place? Where do images come from?