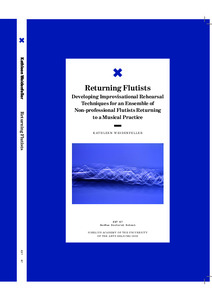 This project is presented as an Artistic Applied project in the Doctoral School of the Sibelius Academy, Helsinki University of the Arts. The purpose of this project was to develop a handbook for directors of flute ensembles of returning flutists. The handbook contains information on adults as learners, general organizational information, skills that a director should develop when working with this type of ensemble, as well as explains the improvisational exercises and the reflective way I use them in rehearsals.

In order to create an ensemble that would provide a supportive environment for the returning flutists, I looked at theories of adult education, motivation, and social learning, as outlined in the report of this project. The development of the returning flutist ensemble Helsingin Huiluorkesteri, my own development as director of the ensemble, and the development of the improvisational rehearsal techniques is explained in a narrative that follows my work with the ensemble over a period of six years. The improvisational exercises developed during the project were drawn from multiple sources of improvisation used as musical education or community building; including theatrical improvisation, trans-stylistic improvisation (as described by Edward Sarath) and Dalcroze Eurythmics. They were adapted and expanded during the project to meet the specific needs of this ensemble and the returning flutist members. My own development as a conductor is an important part of the journey. It not only was a vital part of the development of the actual rehearsal techniques but informs much of the material presented in the handbook,such as the importance of technical conducting skills, in addition to organizational, and social skills to the success of creating a successful ensemble.

Understanding goal orientation mindsets, theories of transformational adult learning, and social learning theory helped me understand the needs of the returning flutists and adapt the rehearsal techniques to meet those needs. Drawing on these theories, I explain in the narrative of the report how a community of learning was developed in the Helsingin Huiluorkesteri, and how the individual returning flutists were able to access both formal and informal learning sources during rehearsals. The effectiveness of the rehearsal techniques was also presented in the Linnunlaulu concert given by the Helsingin Huiluorkesteri. The concert program consisted of original works for flute orchestra containing improvisatory elements and extended flute techniques, including two new works commissioned for this concert. Data used in writing the report was gathered through a rehearsal journal containing my insights from rehearsals and performances, as well as comments from the returning flutists. Later rehearsal-to-concert periods were also recorded on video. In addition, questionnaires were sent to the participants of the Linnunlaulu concert period.