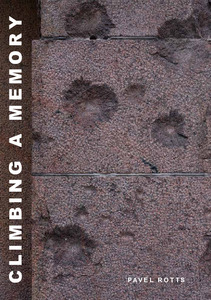 This paper is the written component of my master thesis project, of which the artistic part was realized between Spring 2021 - Autumn 2022. In this text, I analyze the historical background of the project and give it context in the art and culture history field. In the text, I describe the methods of my artistic research and provide a broader perspective on the concepts and ideas which are implemented in my thesis work.

In the first part of the paper, I examine the relationship between art and body using examples from different performative practices situated on the border of merging life and art and using the artist’s body in the artwork. The chapter Art and Exertion compares art practice and the notion of practice in physical activities.

The second block, called Climbing and Memory, examines the connection between sport climbing and memory on different levels. While in the Personal Memories chapter, I pay attention to the symbolic meaning of climbing in the project. The next part Climbing as Healing analyzes the therapeutic role of climbing and bouldering practices in practical psychology and the treatment of depression. The structure of the paper is nonlinear, and there is a certain level of porosity between parts and chapters of the thesis. Some themes and topics emerge several times in different chapters to introduce the other points of view on the topic by writing about it in a different context. In that sense, the Zoomed-in World chapter combines the therapeutic and symbolic meaning of climbing with an analysis of the various manifestations of trauma in the physical world, in this case, the stone’s surface in the city and on the natural rock. The charge of meaning on the rock surface’s smallest detail in the mountains is compared with the importance of the cracks and pockmarks left by bombshells on Helsinkicity walls during WWII.

The following chapters Granite as Film and Memorial on top of Memorial, unfold these directions of thinking further by analyzing traces of bombings in the city as the vehicle for historical memory, comparing the traces of war with archival photographs and, in particular, the surface of the stone with the emulsion on the film in the photo camera. In Memorial on top of Memorial, I give different examples of memorial work with the traces of war in the city space drawing parallels between bombshell traces in Helsinki with the Sarajevo Roses in Bosnia and Herzegovina. The common theme of memory institutions interconnects the two chapters. The examples of artists, architects and city planners working with the memory of war in different cities such as London and Berlin, help to find the similarities and differences between different approaches and make the point about the role of damaged architecture in memorial culture described as an “ongoing struggle between remembering and forgetting”.

The cross-cutting theme of the paper is a relationship between the current war in Ukraine and the collective memory of WWII. The Foreword and Preface, as well as the final chapter, Where Have All the Flowers Gone, create a loop that lets the paper’s main idea surface - that there is no forgotten war in the past, and there is no war, which is somewhere far away. War is always here and now.