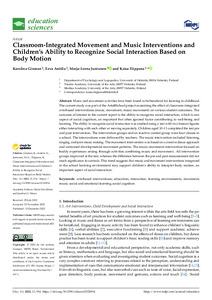 Music and movement activities have been found to be beneficial for learning in childhood. The current study was part of the Arts@School project examining the effect of classroom-integrated arts-based interventions (music, movement, music-movement) on various student outcomes. The outcome of interest in the current report is the ability to recognize social interaction, which is one aspect of social cognition, an important but often ignored factor contributing to well-being and learning. The ability to recognize social interaction was studied using a test with two human figures either interacting with each other or moving separately. Children aged 10–11 completed the test pre and post intervention. The intervention groups and an inactive control group were four classes in a school. The interventions were delivered by teachers. The music intervention included listening, singing, and joint music making. The movement intervention was based on a creative dance approach and contained developmental movement patterns. The music-movement intervention focused on bodily experiences arising through activities combining music and movement. All intervention groups improved at the test, whereas the difference between the pre and post measurement did not reach significance in controls. This trend suggests that music and movement interventions integrated in the school learning environment may support children’s ability to interpret body motion, an important aspect of social interaction.