Generative Art: Between the Nodes of Neuron Networks 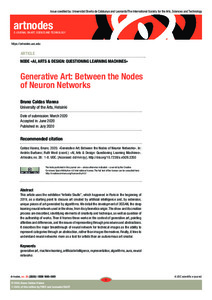 This article uses the exhibition “Infinite Skulls”, which happened in Paris in the beginning of 2019, as a starting point to discuss art created by artificial intelligence and, by extension, unique pieces of art generated by algorithms. We detail the development of DCGAN, the deep learning neural network used in the show, from its cybernetics origin. The show and its creation process are described, identifying elements of creativity and technique, as well as question of the authorship of works. Then it frames these works in the context of generative art, pointing affinities and differences, and the issues of representing through procedures and abstractions.
It describes the major breakthrough of neural network for technical images as the ability to represent categories through an abstraction, rather than images themselves. Finally, it tries to understand neural networks more as a tool for artists than an autonomous art creator.