Basic forms and nature : from visual simplicity to conceptual complexity 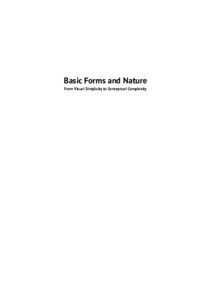 This doctoral work is an interdisciplinary study of basic forms in art and science. It combines artistic and scientific modes of research and consists of artistic productions and the cultural-historical study of forms as well as mathematical explanations. Three pre-examined artistic productions are included in this doctoral work: (1) “Uusi Luonto Tieto” [new nature knowledge], 11.1.-3.2.2008, Forum Box, Helsinki, (2) “Constructed Landscapes”, 10.1.-1.2.2009, Galleria Heino, Helsinki, and (3) “Tutti Frutti”, 5.1.-3.2.2013, Galleria Heino, Helsinki. The thesis begins with the basic forms of classic Euclidean geometry, i.e. the circle, square and triangle since these forms are most often found in the history of teaching visual arts, especially the elements of drawing. This triad constitutes the kernel of modernistic Bauhausian design, while being the visual embodiment of the Platonic theory of Ideas as well. In addition to these simple forms, the branching tree-like form, or dendrite, is considered a basic form in the thesis. Rhombuses play a significant role in the last parts of the thesis and in the appendices and are thus also treated as basic forms. In this study I show how human culture represents nature with basic forms in two ways. For this I introduce two new concepts: perceptual forms representing nature and conceptual forms representing nature. The former refer to mimetic depictions of visible forms and structures that we can see in nature, either with our bare eyes or by using some kind of instruments. The latter refer to seemingly artificial and often geometric forms that we humans have invented by accident or constructed with purpose to visualize phenomena or functions of nature. By depicting perceptual forms, we aim to show how nature appears, whereas by constructing conceptual forms, we aim to show how nature works.
The thesis also includes a mathematical study about the rotational symmetries of rhombic tilings. In a sense this mathematical part presents a generalization of the five-fold rotationally symmetric rhombic “quasiperiodic” tiling discovered in 1974 by Roger Penrose. In the 1980s a similar atypical five-fold rotationally symmetric quasiperiodic pattern was discovered in physical nature from the atomic structure of a certain crystalline metal alloy. The discovery was remarkable as the classic crystallography was based on the assumption that all atoms in crystalline solid matter are organized in periodically repeating units having two-, three-, four-, or six-fold rotational symmetry but never having five-fold or any larger than six-fold rotational symmetry. Dan Shechtman who made the observation received in 2011 the Nobel Prize in chemistry for the discovery of “quasicrystals”, as the new form of solid matter was soon named. During my research I discovered a way to construct a quasiperiodic rhombic tiling with arbitrarily n-fold rotational symmetry, including also all integers larger than six. This geometric model apparently is first of its kind in mathematics of crystallography. The mathematician Jarkko Kari managed to prove [...] in a strict mathematical sense – my “intuitive” solution. The geometric model and its proof were published in our co-authored paper in the peer-reviewed Discrete & Computational Geometry, Vol. 55, Issue 4, June 2016, pp. 972–996. Due to its rather technical nature, the paper is included in the thesis as an appendix, but the most essential features of the model and its background are also explained in more accessible terms. In the end of dissertation I also reconsider the concept of basic forms and introduce an alternative, generalized notion of conceptual systems of geometric forms.