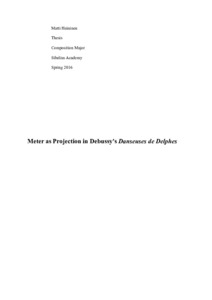 The present study examines the ways in which meter and form are interrelated in Claude Debussy's Prélude Danseuses de Delphes: Lent et Grave. The terminology and conceptual apparatus applied in the study is based on the Theory of Projection presented in the book Meter as Rhythm by Christopher F. Hasty (Hasty, 1997). Meter is seen here as an active and creative musical element, and the problems of musical meter/rhythm and form are approached from the perspective of time and process.

The discussion around the Prelude is as much theoretical as analytic; an important function of the study is to present the Theory of Projection to a reader previously unfamiliar with it. The theory is briefly explained in the first chapter of the study, and chapter two is devoted to the analysis of the Prelude. In addition to addressing several key topics of the Theory of Projection, some new concepts are proposed and problematized alongside the analysis.

In the last, third chapter of the study, the discussion of metrical phenomena extends outside the scope of the Prelude, as some ways in which a view of meter as projection could benefit or influence the contemporary composer/theorist are discussed. This reflects another important aim of the study, which is to present some of my personal interests as a composer.