On the similarity of twelve-tone rows 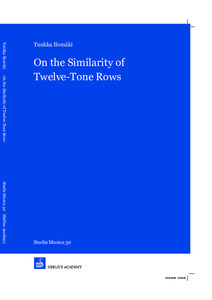 The similarity of twelve-tone rows allows two interpretations: comparison of the properties of the rows and the measurement of their transformational relations. The latter could be conveniently formalized using David Lewin's Generalized Interval Systems as the framework. This allows the linking of the discussion on permutations in mathematics and computer science because the measurement of the complexity of a transformation coincides with the notion of presortedness of permutations.

The study is in three parts. The first part gives an overview of the types of relations between twelve-tone rows, and presents a formalization of twelve-tone rows and row operations in terms of group theory.

The third part discusses the similarity measures and the respective conceptions in detail. While the study focuses on the similarity of twelve-tone rows, the possibilities of extending the measures to the examination of other ordered pitch-class sets are also discussed. The work concludes with some examples of their analytical application.