Temporal correlation in the Goldberg variations 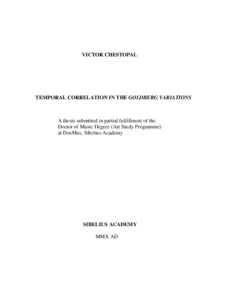 An interpreter of the Goldberg Variations is almost completely deprived of such utterly important guidance as the composer's tempo markings, which are as rare in the Goldberg Variations as they are in the other works of Bach. The final goal of my study is to suggest a logical foundation, upon which an interpreter of the Goldberg Variations can make his/her choice of tempi. Upon the analysis of opus's structure, which reveals an impressive panorama of symmetries, I suggest a multilevel system of temporal correlations, such as the application of a constant pulse-rate to the entire work and the attainment of equality of duration between a number of the work's segments. Hence, the term temporal is used not only with reference to the establishment of tempi for the Goldberg Variations' movements, but also with regard to their temporal proportions in terms of duration. In order to support the concept of symmetrical interrelations between the Variations, I display the motivic correlations between those Variations, which are considered as symmetrically interdependent. At the end of the thesis, the suggested temporal correlations are displayed as a diagram.
The present study, which aims to highlight the exceptional interdependence of the Goldberg Variations' constituents, is addressed to the performers, researchers, and ultimately - via performers - to the listeners.